Home
Blog
Hanging Out With The Divine Mommy 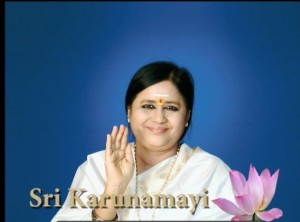 My experience on the fringe with Sri Karunamayi

I’d gone to see just about every spiritual teacher who has come to town in the past several years….meditated, contemplated, studied, argued, fasted, feasted, raved, raged, sat in silence, sat in the Self, sat in my own stuff…been blissed out, been bored as hell, been teed off, been scared. Thus, it was with some reluctance that I took my first meeting with Sri Sri Sri Karunamayi Vijayeshwari Devi, revered by her followers as a living saint….

“I don’t think I should go…” I said hesitantly, trying to be diplomatic.

“Aaahhh, they’re all alike,” I retorted, diplomacy out the window. But I went.
In the time since I left my former guru, I have been a reluctant seeker. I say reluctant because I haven’t always
[GARD align=”left”]
known I was searching, or what I was searching for. I’d go to group meditations, classes, and events of a spiritual nature, but often kicking and screaming. At the same time that I basically trust no one, part of me wants to be “saved,” part of me thinks someone has something to teach me or give me that I don’t already know or have.

I’d gone to see just about every spiritual teacher who has come to town in the past several years, from Ammachi (the “hugging guru”) to Gary Zukav (author of The Seat of the Soul and a frequent guest on Oprah). I’ve sat with 40,000 other people on the lawn at Central Park to hear the Dalai Lama speak on seven obscure Buddhist sutras. I’ve been bopped with peacock feathers, marked with tilaks, initiated, healed, garlanded, embraced, eaten blessed food and pinches of sacred ash, taken Hebrew lessons. I’ve challenged Ram Dass and chanted with Krishna Das… meditated, contemplated, studied, argued, fasted, feasted, raved, raged, sat in silence, sat in the Self, sat in my own stuff…been blissed out, been bored as hell, been teed off, been scared.

Thus, it was with some reluctance that I took my first meeting with the woman called Sri Sri Sri Karunamayi Vijayeshwari Devi, revered by followers in India and abroad as a living saint and by some as Saraswati, the Hindu goddess of learning. The name “Karunamayi” means Filled with Compassion.

It was only a year after I had left my former teacher, and I was still feeling betrayed and bereft; I had not done anything “spiritual” in quite some time and was afraid to. I didn’t believe spiritual teachers were in the compassion business — just in business.

When I looked at Amma Karunamayi’s photograph, I did not feel any particular pull or calling. I flipped through a hagiography about her early life and found myself rolling my eyes heavenward at her devotees’ claims: magical manifestastions, miraculous acts, an aura of divinity, sea-changes in the devotees’ lives.

However, it was my friend L.’s insistence of Karunamayi’s sincerity that finally drew me in. “She says you should keep your own guru, that she’s more like a spiritual mother figure. She seems to walk the talk; and she’s very sweet.”

Well, okay, I thought, as long as she doesn’t think she’s going to be my guru or anything.

That first program I attended was a smallish gathering in a Manhattan auditorium; perhaps there were 50 or 60 attendees. I looked around and did not see a typical throng of stoned-looking, dewy-eyed devotees, although I recognized one or two people from my visits to various ashrams and public meditation programs.

Soon, a tiny, smiling, humble-looking Indian woman in a red sari made her way to a chair in the front of the hall. Amma (Mother) was introduced by a devotee who called her “an incarnation of the Divine Mother.” My eyes involuntarily rolled heavenward in the “Oh, Brother!” mudra.

I didn’t catch a lot of Mother’s discourse; she spoke with conviction, but softly, in a lightly accented voice that was sometimes as tiny as her petite frame. One thing she said, however, stayed with me:

I decided I rather liked this lady.

In preparation for meditation, Amma had us chant the Saraswati Devi mantras: Om ayim shrim hrim Saraswati Devyai Namaha. I found the results calming but not at all trippy, as I had feared. After meditation, there was another round of spirited chanting of the names of Hindu deities. As a self-proclaimed chanting queen, I rated this bhajan session a 9 out of 10; decidedly uplifting and fun.

I went home that evening contented and undamaged, but not especially blown away. It was a pleasant experience but no sea-change. If there were any power trips going on around here, they were not coming from the woman in the chair. If she had any siddhis, or powers, they seemed to me to be “inner.”

The following year’s visit was a little more interesting to me. I attended one of Mother’s “healing services,” held in the basement of a Jewish center in Westchester. This time I even invited some friends to come with me, certain the experience would be benign at worst.

Again with the Divine Ma introduction! My annoyance this time was less. “That’s his belief,” I said to myself about the emcee. “Doesn’t mean I have to buy it to be here.”

As the flowery words were spoken about her, Karunamayi kept her head bowed, eyes modestly downcast, like a Hindu bride. I wondered if she believed what was said of her, and if not, why she didn’t speak up. I decided it was a cultural thing that I would never understand, and tried to be open-minded.

Mother’s healing darshan involves coming to her with a question or a problem. She blesses you, and might give you meditation or lifestyle instructions, something to eat, and an object to carry on your person.

I didn’t have a question for Amma, but told her I was sorry to hear that her mother had just passed, that I’d recently lost my mother as well, and that I didn’t really want anything. She told me something that I couldn’t hear very well and promptly forgot, blessed me by stroking my head for a few minutes, gave me instructions (which I didn’t follow) and fruit to eat (which I did).

I wasn’t sure what I had just experienced, if anything, but it was pleasant, and the chanting was great.

A year later, something shifted for me. I found myself wanting to go to all of Amma’s programs in New York. I experienced even less cringing at the Divine Mother thing. The chanting was still great, my personal exchanges with Amma increasingly heartfelt and touching.

One of the programs was a homa, a fire ceremony, held at a Westchester park. My friends drove me up; when we arrived, they wanted to freshen up before sitting with Amma, so I approached the fire pit alone.

Amma spotted me a good 100 feet before I reached the homa site, and when she did, she placed her hand on her heart and looked at me with so much love I thought I’d melt.

Later in the week, Amma gave a talk at a Hindu temple about the Divine Mother. She related the tale of Mother Kali, a form of the goddess created to slay Mahishasura, the fearsome rakshasa, or demon. In her talk she explained, as she always does, that we are all forms of the Divine, and that the bandhasuras, demons, are the “six enemies” — our base qualities, the Hindu equivalent of the deadly sins — lust, greed, anger, and the like. She exhorted us to slay our bandhasuras, that we had the power. I liked this; it wasn’t the kind of talk I was used to at programs of this sort, where it was all about praising God or great beings. I found the notion of being a divine demon-slayer empowering.

Amma politely listened to the woman, then told her, “If that’s what you think, that’s just another bandhasura.”

At the healing darshan the next day, I offered Mother a big bag of fruit. She pulled out a mango, which she promptly handed back to me, and sent the rest of the fruit with a devotee, to be distributed to the people working at the bookstore outside the hall.

Still I had no questions for Karunamayi — only thanks for her coming to New York and being so loving to all of us. I told her I was happy and that I felt my broken heart was healing.

Then Amma smilingly told me, “Carol, you are so sweet. You’re very beautiful inside.”

It was then that I remembered what she had told me the year before that I hadn’t quite heard.

She had said the exact same thing.

I felt something heavy and painful being lifted as the primordial “duh” entered the very core of my being.

I’m not a gushy sort. In fact, I have this kind of tough exterior and behavior much of the time. Over the course of my life, many have called me “difficult” — and worse. So I saw myself that way too, and believed I was basically and fundamentally not that nice of a person.

Amma told me I was sweet and beautiful inside, and I immediately felt the truth of her words…which helped me to become sweeter on the outside too.

I don’t consider Amma, or anyone else, to be my guru; I’m a hard nut to crack, and I made the decision a long time ago that I’d be no one’s disciple but my own. Despite all this, I have to admit Amma got to me in a big way; and I’m glad she did. 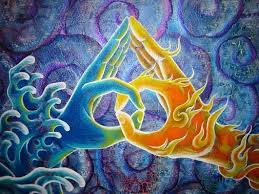