Home
Reading Palms
Palm Reading how many Children we will have

The Indian woman is a symbol of sacrifice, and service and is inclined to treat marriage as a sacrament, not a contract. She loves her husband in all conditions of life, whether he is wealthy or poor and adores him almost like a god.

Marriage known as a social bond sometimes elevates the life and status of a person, giving him or her peace of mind. But sometimes, life becomes a HELL for both partners. Brushing aside other reasons for such a life, a couple in spite of having all the comforts of life have no peace of mind, if they have no children. People run after quacks, saints and holy places for grace to achieve their goal but are usually disappointed and remain frustrated.

Palm Reading how many Children

Palmistry is the science which gives replies to such questions as whether one is destined to have children or not,

Suppose the Hand of the husband indicates children, while his wife’s Hand does not, or vice versa, the palmist has to give his verdict carefully by judging the force of the Hands.

There are divergent views of different palmists regarding analysis for children. We provide some of them for verification by palmists  Fig. 22 shows the details of Lines.

1. From the Mount of Venus at the base of the Thumb, you will find a few Lines pointing towards Fingers. They are called Children Lines by many Indian palmists. Long, thick and clear Lines denote sons, short and thin ones indicate daughters. There will be certain Lines with islands, breaks etc, which indicate either miscarriages or children dying after birth. Out of these strong, uncrossed, unbroken Lines stand for long lived children, whereas the other I linesx  point towards short lived ones.

3. On the base of the Thumb with Palm, you may find a Line enclosing the Thumb. It is said by a few that the number of big islands refers to sons and small ones to daughters. But the author does not agree with this.

4. It is also said by a few palmists that when the Heart Line is long and at the percussion there are tassels or forks, the subject will have children. In case there is no fork at the percussion, childlessness is indicated. Saint Germain has testified to this point.

5. The most authentic place to check for children is under the Mount of Mercury at the base of the fourth Finger. These Lines are found above the Marriage Line or the Line of Union. Perfect fine upright Lines indicate males, while those Lines which are slightly sloping denote females. Miscarriages are denoted by minute perpendicular crossed lines. Difficulty in childbearing or birth or delicate children is indicated by a minute island at the start of the upright Line indicating the child. When there is a very long and wide island, there is danger of death of the child at birth. Perpendicular lines on the percussion form the base of the fourth finger to the line of union with which they correspond. The eldest child is farthest around percussion.

6. Another place to find children is the second phalange of the Finger of Mercury, where there are vertical Lines. Clear cut vertical. Lines indicate the number of children.

7. Children can also be found from the middle phalange of the second Finger where there are vertical Lines indicating the number of children.

8. When one Line is longer than and superior to the others, one child will be more important to parents than the others.

So from the above guidelines, the number of children can be judged. The palmist is advised to use a small sharp torch and a powerful magnifying glass. 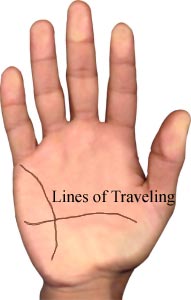 Travel and foreign travel are very attractive words. During my 20 years’ experience, many persons came to enquire whether any foreign Travel Line was indicated an their palms or not.

1. When the Life Line has a large downward branch near the end, one prong terminating in the Mount of the Moon in a firm Hand, it denotes love of travel.lines of travelling

2. When the Line of Life divides at about the centre of the Hand, and one branch shoots up across the base of the Mount of the Moon, it indicates on a firm, well made Hand a restless life, a great desire for travel and the ultimate satisfaction of desires.

3. When long Lines extend from the Rascette or first bracelet and rise into the Mount of Luna, it indicates change of residence to a far off place. When the Fate Line at that point is good, the change is beneficial, otherwise not.

4. When the Line from the Rascette ends in a star or small cross, the journey will end in disappointment.

5. When such travel line ends in a square, it is a sign of protection, as the journey indicates danger.

6. When such Line terminates in an island, there is likely to be a loss on the journey.

7. On the Mount of the Moon, the extending Lines from the Rascette are the most beneficial.

8. When the Travel Line crosses the Hand and goes to the Mount of Jupiter, the journey will be long and fruitful.

9. When the Line goes to the Mount of Saturn, fatality is indicated during a journey,

10. If the Line runs to the Mounts of the Sun and Mercury, it indicates riches, fame and unexpected gain from such journey.

1 1. When the horizontal Lines on the Mount of the Moon cross the Mount and join the Line of Fate, the journey will be longer and more important.

12. When such Line droops or curves downward, loss during the journey is indicated. If it travels upwards, gain is likely.

13. When such Line crosses another, such journey will be repeated.

14. Any square on such Lines will point to danger, but also protection from accident or misfortune.

15. If a Travel Line runs into the Head Line and causes a spot, island, or break, it foretells some danger to Head or some other malady is indicated.

Scientifically, all the above Travel Lines indicate restlessness and a desire for change as the Mount of the Moon is involved.

As we have detailed already, the Mount of Venus stands for love, affection, sympathy. The events are denoted from the Line of Life surrounding the Mount of Venus.’ The more self centred a nature and stronger the power of animal instincts, the fewer and less distinct will be the Lines upon this Mount. 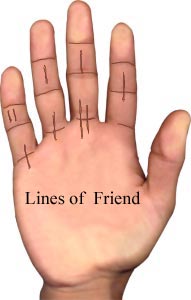 The Mount of Venus denotes the loved one and his or her relations, namely, brothers, friends, etc. Please refer image of Lines denoting friends.

In addition, the Lower Mount of Mars inside the Life Line contains some Lines parallel to the Life Line and indicates the early influences of father, mother, aunt lines of friends and others with whom the subject was associated in his childhood.

All the Influence Lines on the Mount of Venus indicate the influences of persons who have affected the subject. Persons with such Lines are emotional and impressionable.

Often, the Life Line has a sister Line known as the Line  of Mars When any Line or Lines are seer, from the Line of Life or Mars going to the Mount of Venus, they are termed Lines of friendship. If the Lines are clear of any defect, they indicate pure and good friendship not based an selfish interests. But when unluckily, such Line is found with a star thereon, death of some loved one is indicated. In addition, when a Line from the Mount of Venus runs down cutting the Lines of Life and Fate and or not joining the Head Line, that also surely denotes seperation  from or death of some loved one.

K. C. Sen, in his book, Hast Samudrika Shastra, has stated about the lines rising from the Line of Life and running towards Venus thus, on the hands of men, women who are married to them, and on those of women, men who claim the supreme honour of being their husbands, I have generally found these lines denoting marriage partners  and in all cases when these  lines fade out as they moved towards Venus or were crossed by a deep line from the base of the thumb towards the Line of Life, it has been found by me to denote either the death of the marriage partner or the end of their sexual life, meaning thereby that man and woman would henceforth live as friends.’

But the author is in disagreement with this point of view. These Lines not only show husband and wife but also male and female friends and all other persons who have a deep influence on the life of a subject, whether they be within or outside the family.

When the Lines on the Hand are clear, straight and free from defects and when the Heart Line, is not curved and is forked or is provided with a trishul or triple fork, and the Finger of Mercury is low set with a long first phalange and the
point tipped Finger of Jupiter, that indicates that such persons have friendly feelings and can be good friends but when the Mount of Mercury is deficient and the Finger is low set, they are misled by unscrupulous people for serving their own ends.

A few writers are of opinion that the vertical Lines on the third phalanges of all the Fingers of the right Hand denote friendship. If these Lines are uncrossed by horizontal Lines, they indicate happiness and friendship to the subject. 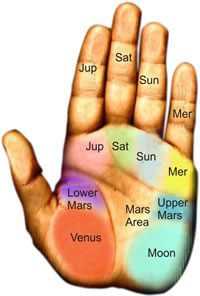 Hand Map The Hand as already explained includes the Hand … 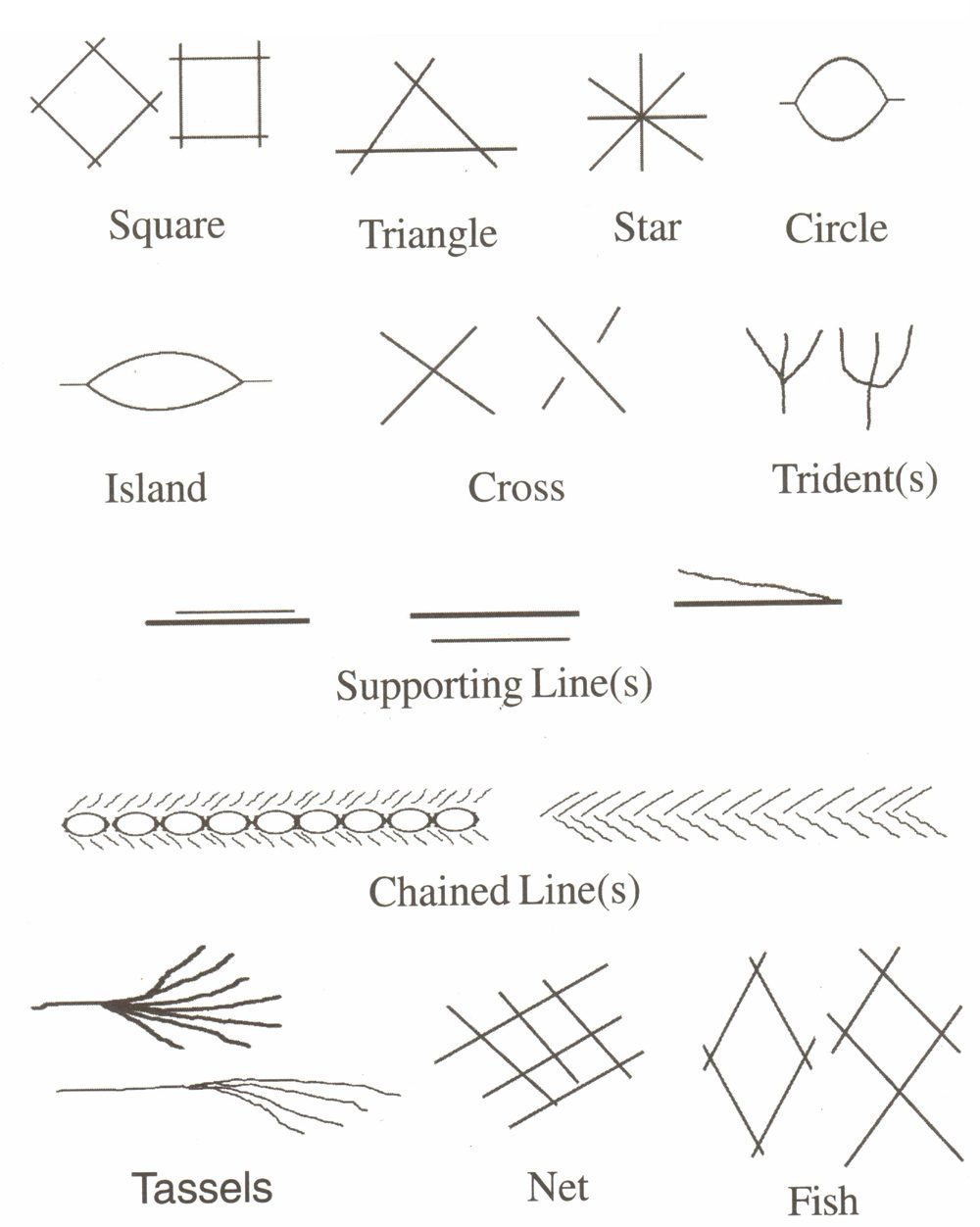