When looking into your own hands, remember that palmists look for many signs within the hands, gradually building up clues about the person and his life. A palmist will never, ever, make a statement by looking at one sign standing alone. It is also important to remember that marriage is a contract made on paper and as such, is not recognised by the hands! The signs in the palm below reveal relationships with other people, they may be partners, or they may just be other people playing a large part in your life, making an impact on you. 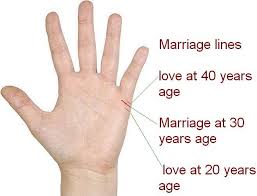 The lines shown below are traditionally known as the marriage lines or the lines of union or affection and are found situated between the base of the little finger, coming in from the outside (percussive edge) of your palm and your heart line, which is the main line running across the top of your palm. Many hand analysts now ignore these lines, no longer believing their accuracy. However, traditionally, these small lines, entering your palm reveal relationships which have or will impress themselves in your life. 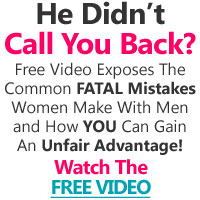 This area can be dated, year one from the heart line, and end of life at the crease of the little finger. The stronger the line, the stronger the relationship. It is possible to approximately date these relationships . The centre of this area would represent the age 37, any lines appearing below the centre would be relationships appearing before this age, and any lines appearing above this mid centre represent relationships appearing after the age of 37. However, remember that the hands do not reveal marriages but rather those who have come into your life for whom you have acquired great affection. An unmarried woman with a much loved pet may have a similar marking!

A branch coming down from the life line, into the Venus mount area, indicates an important person in your life. When a long branch forms inside the life line, (on the thumb side) a relationship is revealed. The longer the line, the longer that person stays in your life, and can be considered to provide back up and support for you for at least the length of time the line remains. Other vertical lines may appear on the ball of the thumb (Venus Mount) Some people have many while others have very few.

They may not necessarily branch away from the life line itself. The closer the influence line appears to the life line, the closer the relationship. Therefore if a line runs very closely to the life line, it indicates a relationship such as a close partner. Any lines appearing further away from the life line may represent close ties with parents, grandparents, etc. These influence lines can be dated by applying a timing gauge to the life line itself. If you take a piece of string and lay it along the life line, from it’s start above the thumb, to the top line (bracelet) at the wrist, this length will equal approximately 70 years or so of life. Measure this far down, even if your life line does not reach this point. By halving the string and laying it back over the life line, you will find the age 35, near the mid point. The life line is timed from 0 years at its beginning above the thumb, and 75 or so where it meets the top bracelet at the wrist. In this way, you can gauge at what age these branch lines, or individual influence lines appear in your life

The fate or Saturn line runs up the palm towards the middle finger. It can start anywhere in the palm, coming in from the thumb side of the palm, or the percussive (outside) edge of the palm. Occasionally you might see a branch line coming in from the outside edge of the palm, to actually join up with this fate line. If the line actually joins and continues as one with the fate line, then a relationship is revealed. The fate line, from the top bracelet at the wrist to the bottom crease of the middle finger is approximately 75 years.

About halfway up the palm, can be considered to be around 35 to 40 years. Sometimes a branch line runs up towards the fate line, but does not quite meet and join with the fate line. This relationship will not last the course.

Occasionally the original fate line stops with a new fate line sweeping in from the outside edge of the palm to take over as the main line. This in fact can have several meanings but sometimes represents a partner becoming more and more important in the life of the subject until the relationship completely takes over the original direction.

Physiognomy Of Men We have previosly explained you the meaning …